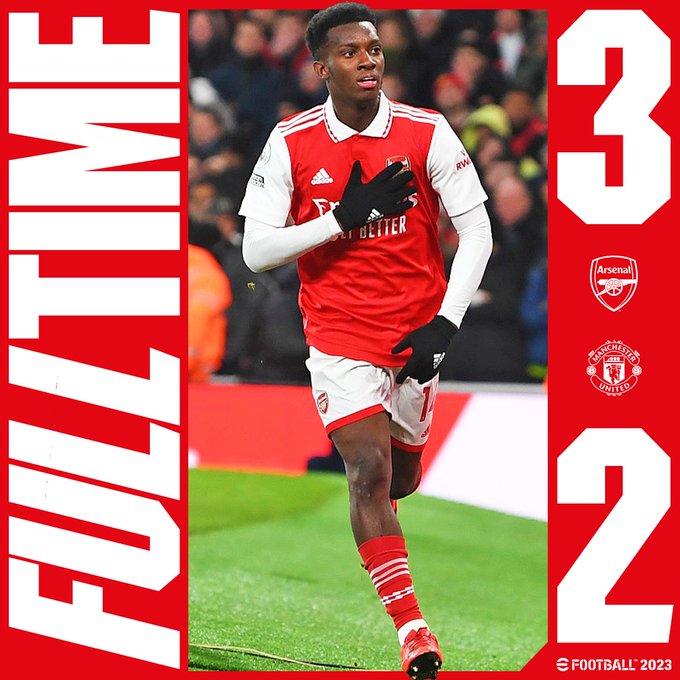 Early in the second half, Bukayo Saka scored from distance to put Arsenal ahead, but Lisandro Martinez’s 59th minute header after Ramsdale spilt a corner drew United level. Arteta’s side piled on the pressure in the closing stages and got their reward in the 90th minute when Nketiah turned in Odegaard’s deflected shot. The result moves Arsenal five points clear of Man City.

Scott McTominay replaced Brazilian midfielder Casemiro, who was ineligible after picking up a fifth booking of the season in United’s midweek draw with Crystal Palace, with loan signing Wout Weghorst again leading the line. New Arsenal arrival Leandro Trossard, who joined late last week from Brighton, had to settle for a place on the bench as Mikel Arteta named an unchanged team.

There is growing sense of belief at the Emirates that the Gunners can at last end their long wait for the Premier League title, which they have not won since 2004. Arsenal flew out of the blocks, with Thomas Partey flashing just wide as they surged forward. But it was United who broke the deadlock in the 17th minute in stunning style, when Bruno Fernandes found Rashford, who skipped past Partey with ease and powered a low drive into the corner of the net from 25 yards.

Arsenal were level just seven minutes later when in-form Nketiah lost Aaron Wan-Bissaka at the back post to nod home Granit Xhaka’s cross. Now the wind was in the home team’s sails as they poured forward but United went close to re-taking the lead with McTominay forcing a diving save from Aaron Ramsdale. Arteta was booked by referee Anthony Taylor just after the half-hour mark as emotions got the better of him but the first half ended all square after few clear-cut chances.

Arsenal were again first to threaten after the break, pouring forward in search of another goal and they took the lead in the 53rd minute. Christian Eriksen stood off England’s Saka, who shifted the ball onto his left foot and fired unerringly past David de Gea in the United net from outside the box. But a pulsating game took another twist when United drew level just six minutes later. Ramsdale spilled the ball from a United corner and Lisandro Martinez threw himself at it, looping a header into the net.

Arsenal regrouped and Saka hit the post in a near repeat of his goal as De Gea watched nervously. De Gea made a fine save when Nketiah blasted at him from close range as the clock ticked down, with United unable to control the ball for sustained spells. United were close to holding out for the draw but Arsenal took all three points when Nketiah scored his second of the afternoon as a lengthy VAR check ruled him onside.