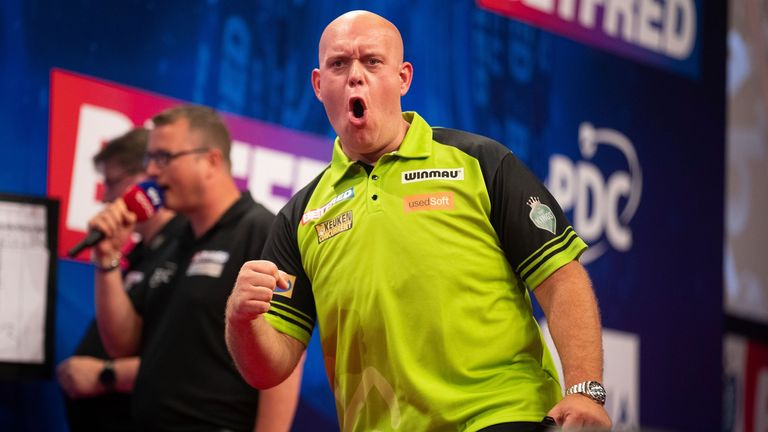 Michael van Gerwen has remained on course for his third World Matchplay crown with an 11-5 triumph over Joe Cullen.

After recently undergoing surgery on his throwing arm, the world number four is not necessarily regarded as one of the favourites to prevail in Blackpool.

However, just like he did against Adrian Lewis in the opening round, the Dutchman produced some of his best darts to get the better of his emerging rival.

Although Van Gerwen missed 21 darts at a double, he was never really troubled by Cullen, the fourth seed booking his place in the quarter-finals with a 97.12 average.

Earlier in the night, Peter Wright came through a thriller with Krzysztof Ratajski, the world number one eventually prevailing by a 13-11 scoreline.

At one stage, Ratajski trailed 7-3, but the veteran Pole stormed back to level the score at 8-8 before the contest went to a tie-break.

Wright squandered numerous match darts before ultimately getting over the line, ending the match with 10 180s and an average of 103.5.

The two-time world champion will now square off against Dimitri van den Bergh, who progressed from the first game of the evening against Rowby-John Rodriguez.

Michael van Gerwen was always in control against Joe Cullen, and he runs out an 11-5 winner to reach the quarter-finals.#WMDarts | R2
📺 https://t.co/eJJXK4DqqY pic.twitter.com/jAwicl3zel

Despite taking the opening two legs of the match, Rodriguez ultimately succumbed to a strong showing from the Belgian, who averaged 98.62 and posted 61% on his doubles.

In what was the surprise result of the night, Nathan Aspinall overcome the challenge of James Wade, rallying back from an early deficit and 7-5 to record an 11-9 win.

Although Wade failed to hit a single 180, the left-hander still averaged just below 95 and hit nine of his 15 attempts at a double.

Nevertheless, Aspinall ultimately broke his consistent opponent to claim his standout victory since suffering from an elbow injury earlier in the year.