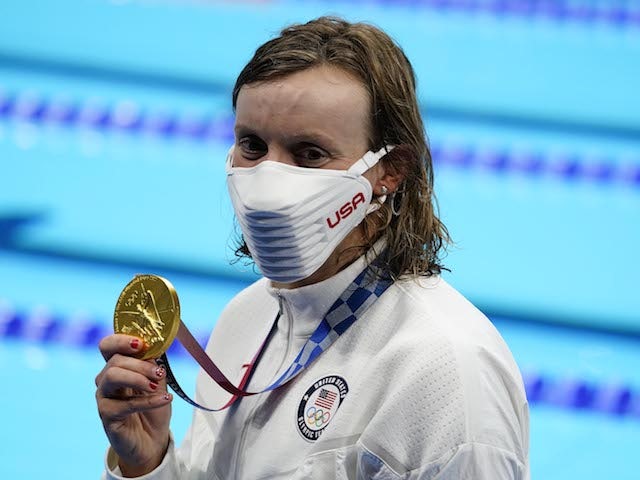 Katie Ledecky collected the sixth Olympic gold medal of her career but the American insisted she does not need any sympathy after being beaten again by Ariarne Titmus earlier on Wednesday.

After finishing runner-up to the Australian in the women’s 400 metres freestyle final earlier this week, Ledecky was aiming to hang on to her 200m title and win the 1500m showpiece at the Tokyo Aquatics Centre.

However, she was a distant fifth in the shorter race, 1.71 seconds adrift of Titmus, who claimed victory in an Olympic record time of one minute 53.50 seconds after a thunderous finish, having been fourth at halfway.

Ledecky rebounded in the inaugural women’s 1500m and a time of 15mins and 37.34 secs saw her add to her Olympic gold collection as she finished more than four seconds head of compatriot and silver medallist Erica Sullivan.

Ledecky was in contemplative mood afterwards. While she cherishes taking her tally to half a dozen Olympic golds, the 24-year-old reflected that winning is not the be-all and end-all for her.

“I’ve gone to children’s hospitals and met wounded warriors and their faces light up when up when they see the gold medal, that means more to me than anything – the ability to put a smile on someone’s face,” she said.

“I just really wanted to get a gold medal to get that opportunity again. But I kind of laugh when I see things like ‘settles for silver’ because there are so many Olympians who won silver or bronze who are really happy with that.

“They are deserving of a lot of praise. Just because I’ve won golds all the time leading into that, it doesn’t mean that the silver doesn’t mean something to me.

“I don’t want anyone to feel sorry for me or feel like silver or any other medal besides gold is a disappointment or anything. I would much rather people be concerned about people who are truly struggling in life.

“We don’t get this kind of attention and support every year so I do truly appreciate the concern and the support and interest in our sport and I guess I just hope people can pour that energy into other things as well.”

Ledecky won three individual women’s freestyle titles at Rio 2016 – 200m, 400m and 800m. She will be looking to keep one of those in possession and she could come up against Titmus over the 800m distance later this week.