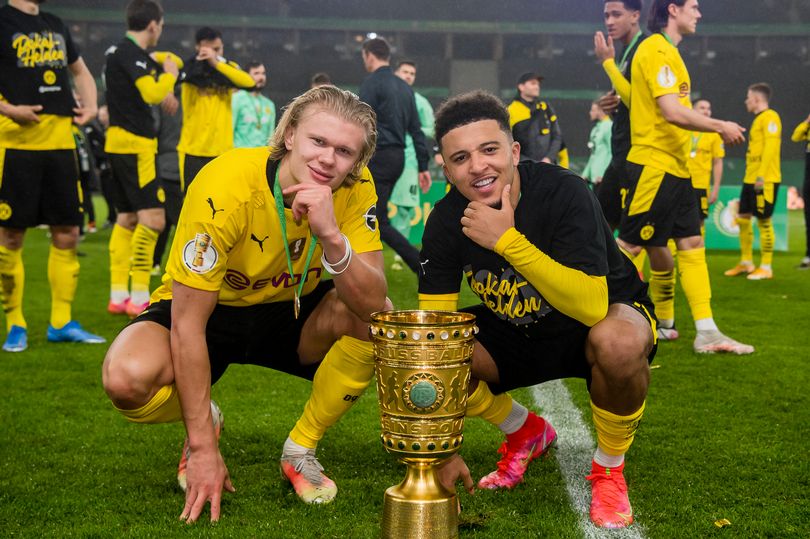 When Manchester United signed Jadon Sancho for £72.9million last summer, Raheem Sterling was the only English player to record more goal involvements (110) than Sancho (109), which is goals and assists combined, across the previous three seasons.

United were persistent in their pursuit of Sancho and they had finally landed his signature, for a reasonable price as well. Manchester City’s £100m signing of Jack Grealish made United’s deal for Sancho look like remarkable value. Sancho had spent four spell-binding years with Borussia Dortmund in Germany and he had established himself as one of the world’s most exciting prospects.

Sancho was brought back to earth last season. United’s toxic dressing room would have burdened most and he was meeting adversity for perhaps the first time in his career. Sancho played wonderfully illuminating football during his time with Dortmund but he suddenly appeared weighed down and devoid of confidence in his first season at Old Trafford.

He had no problem settling back into life in Manchester but clearly struggled to adapt to the demands of the Premier League. Sancho had been afforded more time and space in the Bundesliga and there had been less mental pressure to wrestle with.

The 22-year-old was suddenly enduring a confidence crisis and that coincided with the team around him falling apart. It would have been a challenge for Sancho to make an immediate impact regardless, without his teammates grossly underperforming.

The environment at United was never going to be conducive to Sancho performing how he might have done. Sancho contributed five goals and three assists in his debut United campaign. He’d contributed 16 goals and 20 assists the season before.

Sancho was signed to play on the right-wing at United, but it quickly became clear that he was better on the opposite side. He finally found some form in February and March — he was involved in just one goal outside of those months — but he was unable to sustain those promising performances. Sancho regressed again and he was sidelined with tonsillitis for the final games of the season.

There is no denying Sancho’s debut season was underwhelming. His performances have also caused United a headache, which they already thought had been solved. Sancho was best on the left and they (still) don’t have anyone at the club to play on the right.

Marcus Rashford is remarkably ineffective on the right and Anthony Elanaga recently declared it was his preference to play down the left channel. United have spent £120m on right-wingers across the last two seasons yet the position remains an obvious problem.

That means it took Sancho 155 minutes to score a goal from the left and 219 minutes to score from the right. He played on the left wing more times than he did on the opposite side in his final season at Dortmund. United would have been aware of that.

Sancho was viewed as the perfect right-wing signing and he’s actually been an underwhelming left-wing singing instead. The obvious silver lining the fact he possesses abundance of talent and he is bound to come good at United, with some patience.

Whether Sancho ascends to levels he was performing at with Dortmund on the left or right remains to be seen, but he would be doing United a favour if he found form playing in the latter position. Erik ten Hag wants to sign Antony — a right-winger — this summer but that £40m quoted fee for the Brazilian could be used elsewhere if Sancho was to provide some value on the right.

It’s also in the player’s interest to succeed on the right, given United have more depth on the other side. Sancho could very well potentially be contending with Rashford to start on the left in the new season and that would be an interesting dynamic.

Rashford endured a nightmare campaign last term so Sancho started ahead of him by default. But if the academy product comes back to Carrington stronger and hungry again — as sources close to the player suggest he’s preparing to do — then Sancho will certainly need to up his game.

“I don’t mind, as long as I’m playing,” Sancho said in March when asked which side on the wing prefers. His performances speak louder than his words, but it would be convenient for everyone involved if he could fulfil the role he was signed to play.