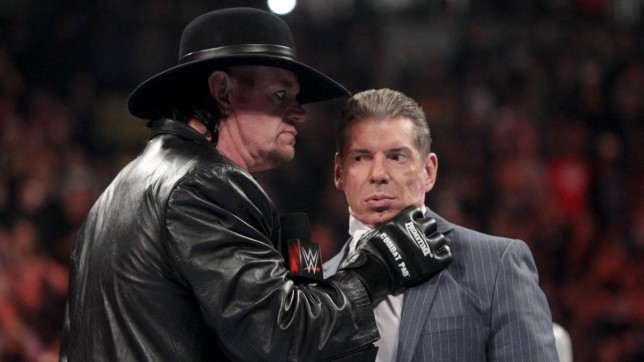 The wrestling giant’s chairman will make a rare out of character public appearance as he honours one of the greatest superstars of all time at the ceremony in Dallas, Texas on April 1.

Making the announcement on the Pat McAfee Show – during his first live interview in 15 years – Vince admitted his close bond with the Phenom will make his speech difficult.

‘I love the guy,’ he said. ‘He’s an extraordinary human being, as well as one of the all-time greats.’

He explained that talking about the Dead Man’s character ‘won’t bother [him] at all’, but speaking about Mark Calaway himself will be an entirely different beast.

The former world champion will be honoured at the AA Center on April 1 as part of a double header with SmackDown just one night before WrestleMania gets underway at the AT&T Stadium.

WWE confirmed that ‘additional 2022 WWE Hall of Fame inductees will be announced in the near future’.

Taking to Twitter, Undertaker said: ‘Received an overwhelming response to the news. Thank you to everyone who reached out but for now, I’ll say this… it’s been a wild ride … headed to the #WWEHOF!’