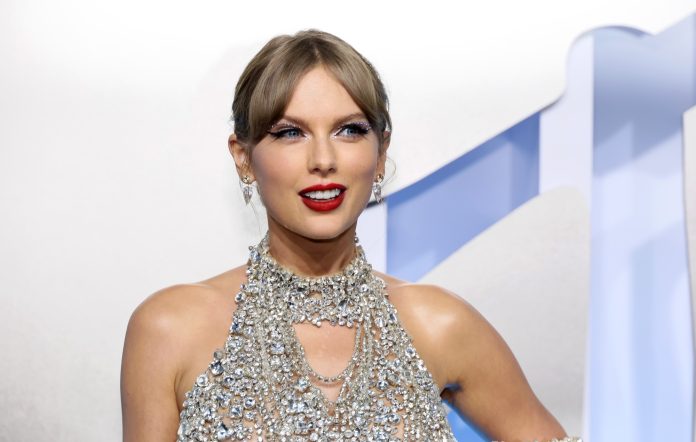 The series titled ‘Midnights Mayhem With Me’ was announced earlier this week (September 21) and has Swift randomly picking which song titles to disclose in the lead-up to the album’s release next month.

“I know that I have a habit of dropping cryptic clues and Easter eggs when giving you information about my music, and I’m not here to deny that. But I am here to defy that,” Swift says to the camera before introducing the new series.

“I’m going to be using this technologically advanced device to help me allow fate to decide exactly what track titles I’m going to be announcing, and in what order,” she continues, pointing to a bingo cage with 13 balls. Each of the balls are numbered, representing a track on the album.

Swift began by drawing the 13th ball, representing the final song on the album’s tracklist. The song is titled ‘Mastermind’. Today (September 23), she posted another TikTok where – accompanied by her cat Meredith – she revealed the title of the eighth track: ‘Vigilante Shit’.

‘Midnights’ is scheduled for release exactly one month from now, on October 21. Swift announced the album last month while accepting Video of the Year at this year’s MTV Video Music Awards ceremony, outlining the record with a message to fans shortly afterwards.

“This is a collection of music written in the middle of the night, a journey through terrors and sweet dreams,” Swift wrote at the time. “The floors we pace and the demons we face. For all of us who have tossed and turned and decided to keep the lanterns lit and go searching – hoping that just maybe, when the clock strikes twelve… we’ll meet ourselves.”

Apart from its thematic concept, few other details are currently known about the singer-songwriter’s 10th album, but she recently revealed that frequent collaborator Jack Antonoff worked on the record.

On Tuesday night (September 20), Swift was honoured with the Nashville Songwriters Association International’s Songwriter-Artist of the Decade Award at the NSAI’s annual awards ceremony. During her acceptance speech, she discussed breaking her lyrics into these distinct categories, re-recording her first six studio albums, and the extended, 10-minute version of her ‘Red’ song ‘All Too Well’.