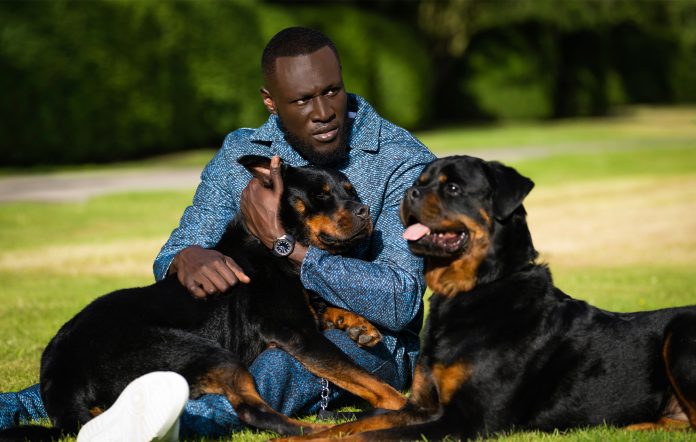 Stormzy has returned with his first solo outing in almost three years: an epic, seven-minute declaration of his legend status – featuring a guest verse from Stylo G and a striking monologue by Wretch 32 (narrated by actress Michaela Coel) – titled ‘Mel Made Me Do It’.

The track stands out with its minimalistic, progressive instrumental, buzzing along with sharp 808 beats and modulated string-work while Stormzy’s vicious flow keeps in the spotlight. Wretch 32’s monologue adds an emotional weight to the track, as Coel intones with a poignant gravitas: “Today, we speak about foundation. Many great Black influential giants have touched people, from soul to soul, throughout many generations.

“It’s often ‘greatness’ comes to mind, but footballing legends like make Ian Wright greatness come to sight. Our DNA empowers us. We can make a song and dance out of everything. Our genes are enriched – it seems there is not a seam out of place in our fabric…”

‘Mel Made Me Do It’ arrives alongside an 11-minute music video directed by KLVDR, fusing multiple storylines and showcasing over 35 cameos. Among those include the likes of Dave, Headie One, Little Simz, Louie Theroux, Malorie Blackman and Usain Bolt. Have a look at the clip below:

Though unconfirmed at the time of writing, it’s assumed that ‘Mel Made Me Do It’ will appear on Stormzy’s upcoming third album, which the Croydon MC said in March would be released before the year’s end. He announced it during the first show of his recent UK tour, teasing punters with a video of himself working on the album in a studio. At the end of the footage, a message was displayed onscreen reading: “Album 3. Coming 2022.”

In the months since then, Stormzy announced an Australian tour for November, made his debut at a Met Gala, earned an honorary degree by the University of Exeter, met the iconic voice behind Bart Simpson, and briefly took on the role of football pundit. He’s also made on-stage cameos for the likes of Knucks, Coldplay and Dave.

Stormzy’s last album was ‘Heavy Is The Head’, which landed back in December 2019 via #Merky and Atlantic Records. In a four-star review of it, NME’s Carl Anka wrote: “Stormzy came out swinging for his second album – it’s big, it’s broad and it is mostly brilliant. ‘Uneasy is the head that wears the crown,’ wrote William Shakespeare. After listening to this new album, we’d say Stormzy is handling things just fine.”

Earlier this month, Stormzy addressed the crowd at a London march protesting the killing of Chris Kaba, urging them to “keep going”.