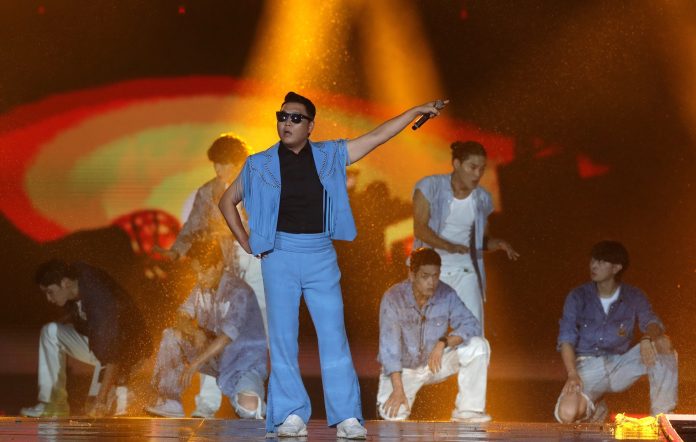 The South Korean city of Yeosu has demanded its Jinnam Stadium be restored its original state after a recent Psy concert left the venue “severely damaged”.

On August 15, KBS News reported that the floor of Jinnam Stadium in Yeosu City, Jeollanam-do had been left “severely damaged” after Psy’s August 6 show at the venue, which drew 28,000 concertgoers.

According to the report, half of the stadium’s 600 square metres of elastic flooring had been “badly dented and torn off” following the concert. Jinnam Stadium is part of Yeosu City’s multi-purpose sports complex, which serves the city’s population and its visitors.

Yeosu City has since demanded Psy’s concert organisers assist in restoring the venue, after its investigators determined the damage was caused by the use of a forklift to transport stage equipment.

“In the event of damage to the facility, it is supposed to be restored to its original stage as a condition of [granting] the permit,” said Ahn Bo-hyeon, the city’s deputy director of its sports support division, told KBS News. Ahn added that the city would discuss a review and restoration plan with the concert organisers to repair the damage.

As of writing, neither Psy nor his agency P Nation have addressed the claims and demands made by Yeosu City.

The 2022 edition of Psy’s annual ‘Summer Swag’ concert series has made headlines in recent weeks. In late July, a construction worker died after falling from a height of 15 metres at Gangneung Stadium. At the time of his fall, the worker had been dismantling the set of Psy’s concert, which was held the previous day. P Nation issued a statement expressing its “sincerest condolences” over the worker’s death.

The concert series also came under scrutiny when South Korea’s Central Disaster and Safety Countermeasure Headquarters said it would investigate after receiving reports of people claiming to have “contracted COVID-19 after attending a music concert that ‘sprays water’”.

Though the government body did not identify the concert in question, Psy’s ‘Summer Swag’ concerts are known for their liberal use of water effects, which are used to drench concertgoers. The Korea Herald previously reported that the concerts could use up to 300 metric tonnes of drinking water in one event.