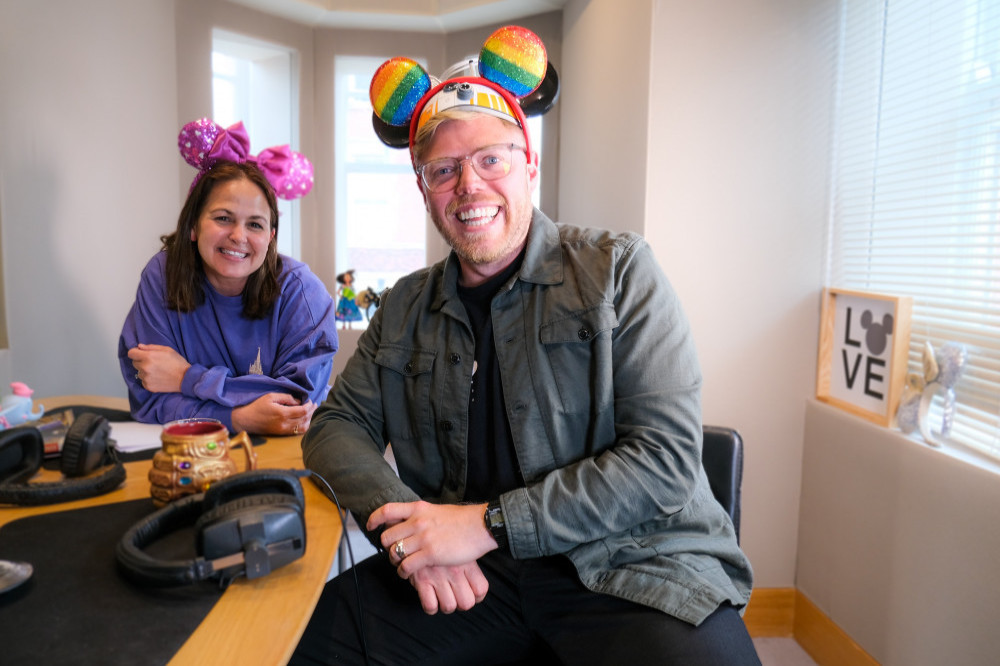 The ‘Celebs Go Dating’ narrator revealed the lengths he went to stop one of his two daughters – who hehas with his wife Louise Watts – from attacking and removing the lady’s tresses from her head.

Speaking on the Walt Disney Travel Company’s podcast ‘Journey to the Magic’, he told host Giovanna Fletcher: “We were on our way back from Tenerife – which is too long a flight for what is like a little easyJet budget one. We had an 18 month old with us on our lap.

“Lou had our elder one who was 4.5 who wasn’t well and fell asleep on her. Lou loved that, out of the game – by the window, a kid with a temperature asleep on her that’s had Calpol – the dream scenario isn’t it!

“I held an 18 month old in my hands that was just jumping on my legs for four hours. There was an older lady in front – you know when ladies get to about 80 and their hair just becomes this sort of big grey bird’s nest that is just wiry … and my daughter just went to grab it – but you know at 18 months they are strong – I spent four hours pulling her back so she didn’t, because I reckon, she could have pulled this old lady’s head off.”

Rob has also confessed he is “scared of rides” so he loves Walt Disney World’s Magic Kingdom and praised how there is “loads” for little kids to do there.

He said: “You could take a four year old to Magic Kingdom and there’s loads for them to go on. What’s also good, because I’m scared of rides – I shouldn’t say that really – I was really worried that I wouldn’t be able to go on all the rides, so when we went to Disneyland Paris, they’ve got loads of smaller rides, and I went on them.

“So we were getting the children used to rides but actually I was starting from zero again, I’m working my way up! Again, in America we did that and by the end of it, I went on the Thunder Mountain one and the Slinky one, which is quite big. I was doing all of them and ones with drops and stuff like that way bigger than what was stressing me out before.

“So it was so nice and Magic Kingdom’s perfect for that because you could work your way up, there’s that little Goofy one that’s tiny but you do that couple of times. I was very anxious kid so if your kid is quite anxious definitely just go slow and work them up. I could have got my kids on Space Mountain at 6 if they were tall enough, they would have gone anything.”

A new fun-packed episode of the six-part ‘Journey to the Magic’ series is being released every Wednesday from 18th May and concluding on 29th June and they are available wherever you listen to your podcasts.