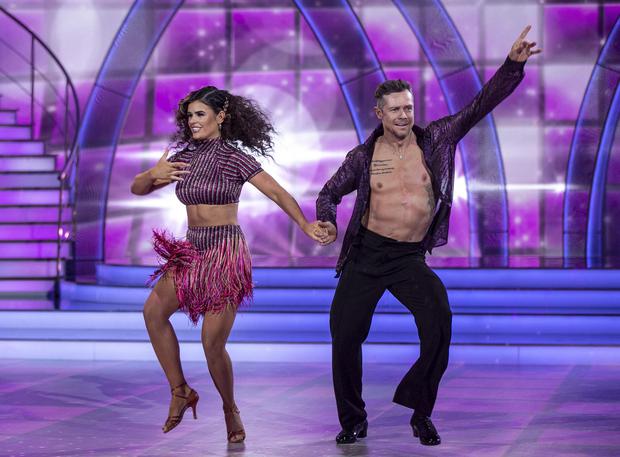 Dancing With the Stars pro dancer Karen Byrne was full of praise for her partner Nicolas Roche after they lost out in this week’s dance-off against Ellen Keane and Ervinas Merfeldas.

Right from the start, Nicolas wasn’t expected to go too far in the competition. But he made it to the quarter-finals, just two weeks away from this year’s grand final, which is on Sunday March 27.

“I actually feel very proud, because getting to week 10 is a massive achievement for someone that has never done a step in his life before,” Karen said after Sunday nights elimination.

“It’s only when you think about it: oh my god, there were only two weeks left

“And as for Nicolas’ journey – where he came from, let’s be honest, -1 on week one. For him actually to last to week 10 is a massive achievement for someone who has never danced a step in his life before.”

Looking at Nicolas, she told him: “You really did progress.”

As for Nicolas, he reflected on his time on Dancing With the Stars and spoke candidly. “It’s a journey – and very addictive,” he admitted. “There’s a lot of emotions . . . and you always want a bit more.

But Karen’s clearly impressed with the dedication he showed over the course of their time together on the show.

“He never gave up and fought to the end. I’m so proud of him,” she added, with some emotion in her voice. “I couldn’t have asked for a better partner. He was perfect. Did everything I asked of him and more, and couldn’t have been nicer.”

As for his next move, Nicolas has to head back to France to check his mail, before returning to Ireland for some much-needed down time with his Irish relatives.

“I’ve been here in Ireland almost three-and-a-half months so, most likely, during the week I’m going to pop back in to Monaco just to sort out the post,” he says. “I’m afraid to open the post!

“And then I’ll be back here again the week after that. I’ve been living here with the family for over three-and-a-half months and I kind of want to stay now, let it sink in, and be with the family.

“After that, I’m doing some TV in April, so I’ll go home for three days, clear the suitcases, and then I’m gone again. I’ve got to pay the bills,” he added, with a laugh.

Dancing With the Stars continues next Sunday at 6.30pm on RTÉ One