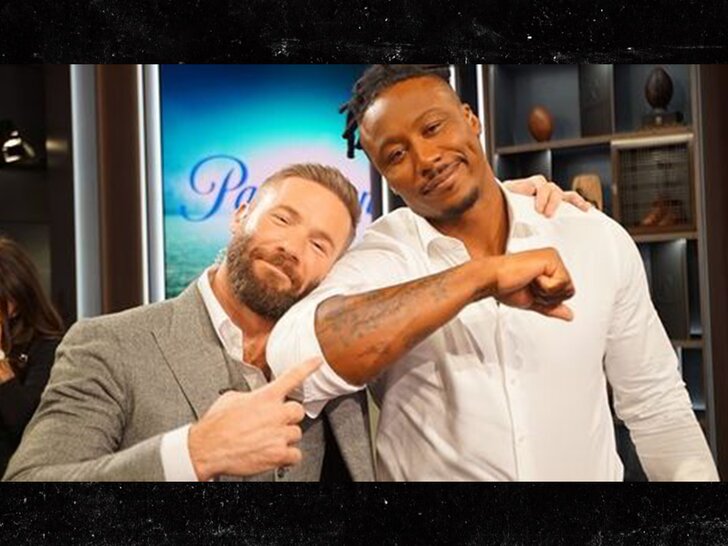 Brandon Marshall has had a tremendous post-playing career and continues to rule the media. Marshall has had a lot of success, from the “I Am Athlete” podcast to his work on Inside The NFL. He has a charming demeanor, and his insights are greatly appreciated.

Marshall has a particular connection to the New York Jets as he got to play for the team about a decade ago. His biggest rival was the Patriots, although they typically had his number. That said, Marshall decided to bet former Patriots receiver Julian Edelman last week.

Brandon Marshall (@BMarshall) & Julian Edelman (@Edelman11) made a tattoo bet this week on the #Jets, #Patriots game. If NYJ wins, Jules is getting the #TakeFlight logo on him + if NE wins, BM is getting the #ForeverNE logo on him 😳: 🎥 @insidetheNFL #NYJvsNE @nyjets @Patriots pic.twitter.com/51IQ3P0cRb

Despite the humiliation that would come with getting a Patriots tattoo, Marshall went through with it. Yes, that’s right, Brandon Marshall now has himself some Patriots ink on his forearm. The tattoo was even shown off by Edelman on Instagram, although as you can see, it is quite small.

Edelman captioned the post “A bets a bet. And @bmarshall is a man of his word. Thanks for saving me @patriots.” Of course, both were very good sports about the whole thing, and it’s nice to see the camaraderie here. It just goes to show that football is a fraternity, and there is a ton of respect among former rivals.